The Benefits of Rugged Technology in Industrial Monitors

The world is running millions of applications every day. The use of monitors has been convenient for daily computing and personal needs. However, most of these monitors are designed for commercial applications like those in office settings. But what to do about applications in factories where chemicals, random vibrations, and unpredictable temperatures are present? They use monitors as well. But are all monitors created equal? No. Fortunately there are rugged monitors designed predominantly for harsh industrial applications that are essential to take advantage of. Commercial systems are not designed to operate in wide ranging temperatures, nor are they resistant to random shocks and vibrations seen in industrial environments. 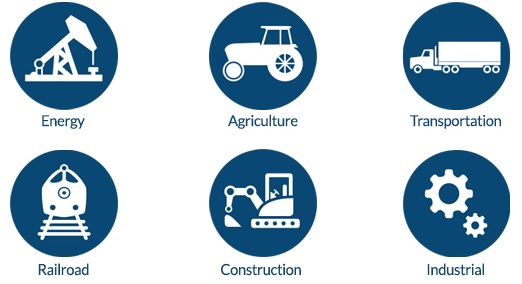 The Mechanics of Rugged Monitors

Rugged monitors can go places where commercial monitors would not be able to endure. They operate efficiently in the harshest of environments with options of military standards whether it’s for oil rigs, food factories, marine/ship use, and medical operations, power plants, building automations, railways and many more demanding industrial applications. It is important to look at the technology of rugged monitors. This article explores the construction of these revolutionary monitors and their resistance to electromagnetic waves and harsh environments.

-Strength of steel and stiffness

-Operational in high and low temperatures

Aluminum die casting provides EMI and RFI shielding. This is extremely critical for industrial monitors to protect the system form electromagnetic waves. The article examines the influences of EMI in the last sections.

The many industrial applications like the ones mentioned previously will exhibit shocks and random vibrations whether they are caused by other machines, and unexpected movements in velocity and motion. These random vibrations can be a primary cause for system failures. But unlike commercial systems, rugged monitors are tested and designed for shocks and vibrations.

Industrial environments like manufacturing factories are known to be harsh, dusty, wet, and often exposed to chemicals. Such environments are no place for ordinary commercial monitors. There is a reason why you don’t see iPads and Sony monitors in food processing plants. An ordinary monitor’s sensitivity would not be able to sustain these extreme settings, not to mention over heating and water damage through the screens being one of the first causes of system failures within a short period of time. Industrial grade monitors combat these harsh environments because they are equipped with a standard of protection called Ingress Protection (IP). Acnodes Corp. provides rugged monitors equipped with IP65 ratings to protect against dust and water sprays from all directions. 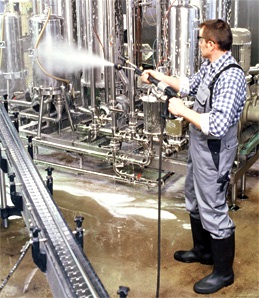 Moreover, protections against dust, water and random vibrations are critical for productive operations but still not enough. Commercial systems can only operate in a limited range of temperatures and specific environments. Not only does it affect the external, but internal system as well, do to overheating and stopping production. Cold temperatures can also damage of system and distort the electrical circuits when expanding. 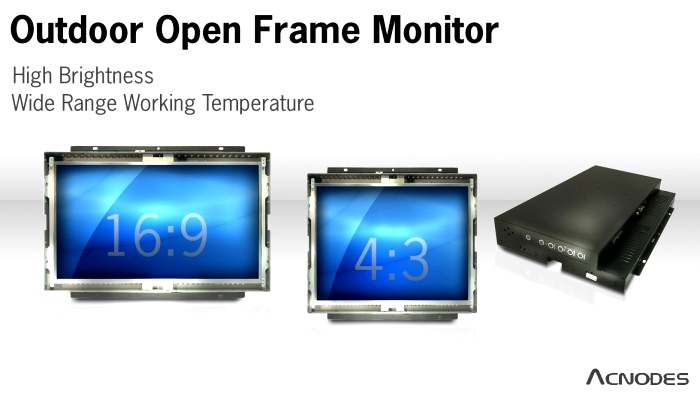 Acnodes provide industrial monitors operating in temperatures ranging from -20 to 50 degrees Celsius and monitors for indoor and outdoor operations. The monitor you see below is an open frame monitor with 700/1000 nits high brightness, and anti reflective screens designed for sunny/bright outdoor applications.

The first is resistive type. Also known as 5-wire resistive, this type of touch screen is one of the most popular and reliable touch screens that meets the IP65 standard of ingress protection and provides long life operations. It consists of a glass panel with a resistive coating. When an object makes contact with the screen, electrical contact is created by the conductive coating and then digitized. 5-wire resistive touch screens are suitable for restaurant POS systems, food processing factories, medical equipment, and machine control. One major advantage of the resistive touch is not limited to just the finger like most touch screens, but it can be operated by any object including but not limited to: stylus, pen, gloved hand.

The next popular choice of touch screen is commonly seen in smart phones and tablets in the market today, the Projected capacitive. This type of touch screen technology enables multi-touch functions, fast response times, provides clarity, offers low maintenance, and resistant to scratches and fluids. Projective capacitive features one-time collaboration only. They can be made of plastic, ensuring flexibility. Although it can not be operated with any object like the 5-wire resistive, it can be accessed with your finger and surgical gloves. Its great for stainless steel panel PC’s that require complete wash-downs. The multi-touch option serves many purposes by producing superior visualization and more user-friendly operations. It delivers easier control on the applications that require focusing and zooming on a specific area.

Harsh environments require their monitors to be robust and durable. Commercial systems do not have standard protections that meet the requirements of the harsh environments that are present in places like food factories, building automation, power plants, etc.  Ultimately touch screens like the 5-wire resistive and projective capacitive will deliver best towards industrial operations.

Electromagnetic protection is especially crucial for electronic machines like these monitors. Not only does it need to be designed to shield against interferences when machines are too close to each other, but the machine itself must not produce electromagnetic interferences towards others. Without it, image quality on the monitor can be degraded along with other system problems. This is why EMI shielding makes aluminum die-casting chassis a smart natural tool for industrial monitors.

Monitors and touch screens are extremely important for numerous amounts of applications. It gives a visual on the productions and health of the machines. Touch screens provide access to control the numerous amounts of operations all on your fingertips. You must realize that in order to guarantee the durability and effectiveness of these monitors, they must meet industrial grade quality. Using rugged technology not only makes operations run more productively and reliably with minimum maintenance, but you can expect a long product life as well.  Industrial operations demand the right technology for mission-critical tasks, and that’s what rugged monitors are here to deliver.