Acnodes APA9XXX series come in a wide range of LCD sizes for your industrial needs. The panel mount sizes includes 7", 8", 10", 12", 15", 17", 18.5", 21.5", and 23.8" touchscreen displays. They also feature new LED backlights to save power. One of the biggest problems that drain your monitor’s power consumption is the luminescence the monitor light gives off. Monitors that incorporate LED backlights are not only energy-efficient and better for the environment, but also produce accurate colors and color gamut. Have more color gamut increases the range of colors that are available on the monitor. These rugged monitors have taken into account of outdoor-settings and highly lit environments as well as optical bonding. Acnodes HMI monitors include options for high brightness features to compensate for highly lit environments like in sunlight. Optical bonding is useful for touch screen monitors that are not weatherproof or ready for extreme environments. Optical bonding uses silicone or urethane to cover the LCD for better protection against harmful substances like dust and moisture. It can also improve the LCD’s ability to endure shocks and vibrations. And finally, optical bonding does not just protect the LCD physically, it allows for clearer views of the screen by removing internal reflections. Optical bonding with high brightness (1000-nit) gives users excellent visibility. It is time to start investing in long-term monitors that meet the demands of all industrial applications.

Choosing the right touch screen to meet specific applications is absolutely crucial. The APA series offers two types of touch screens that users can choose from; Resistive or Projected Capacitive. Resistive touchscreens, which remains the most prevalent type of touchscreen technology used in industrial applications and manufacturing environments, consists of a glass panel and film screen that is separated by a narrow gap. When a user touches the screen, the two electrode layers (glass panel & film screen) come in contact with each other and produces an electrical current that registers the touch. Although it is not as sensitive as PCAP touchscreens, Resistive touchscreens can be used with various objects such as your finger, gloved hand, or stylus. Resistive touch screens are highly resistant to water and dust, however, are not the most sensitive forms of touch screen technology. Projected Capacitive touchscreens, also commonly known as PCAP or multi-touch, are composed of a sheet of glass with embedded transparent electrode films and an IC chip that supports multi-touch. PCAP touchscreens function when the user touches the screen and capacitance forms between the finger and sensor grid, registering the touch. Projected Capacitive touch screens are typically used in smartphones and tablets that are coated with ITO and activated by the electrical charge from your finger. The great benefits of capacitive type touch screens are that it supports multi-touch, and unlike resistive types, capacitive touch screens are highly sensitive and clearer.

Apart from LED backlight technology and advanced touch screens, the HMI touch screens feature a front IP66 rated water and dustproof bezel. Ingress protection rating, which is also known as IP Rating, is a rating recognized by the two letters, "IP", followed by two numbers. The numbers represent the amount of protection of the machine’s ability to resist outside matter. The first number refers to the protection against solid particles, such as dust. The second number means the level of protection against liquids, such as water. The larger number of each digit means the greater power of protection. Therefore, to get more protection or higher protection, users can choose the larger numbers of IP ratings. 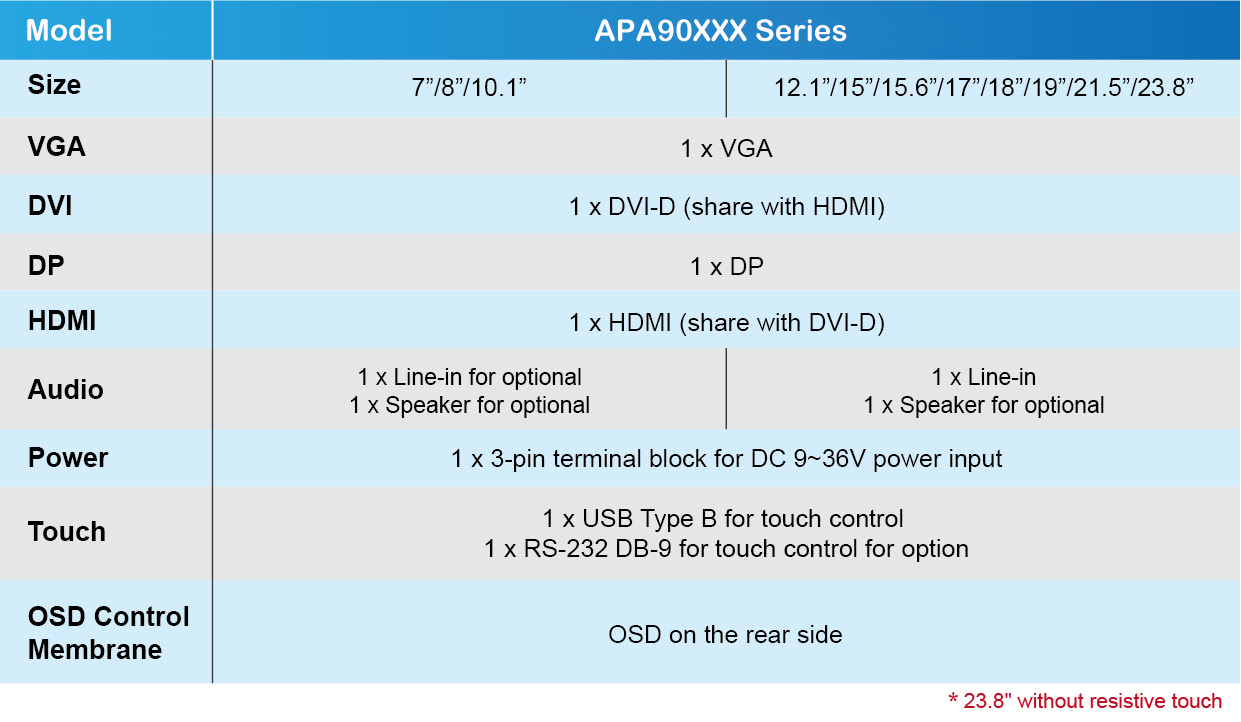