Comparison Between HDD vs SSD in Embedded PC Storage Applications

Solid State Drive (SSD) and Hard Disk Drive (HDD) are both storage components that differ based on purchase needs, preferences, and budget. HDD is the traditional spinning hard drive and is the basic nonvolatile storage on a computer. Even when the system is turned off, the data on the system memory doesn’t “go away”. Hard drives are essentially metal platters with a magnetic coating and the coating stores the data. It uses a mechanical arm with a read/write head to move around and read information from the right location on a storage platter. SSD’s functionality is the same as HDD’s, it saves data while the system is off, it boots the system, and etc. But instead of a magnetic coating on top of platters, the data is stored on interconnected flash memory chips that hold the data even when there’s no power present. In some high-end workstations, the chips are stored in a PCI/PCIe card.

Both SSDs and HDDs deliver the same tasks. They store applications, boot the system, and store personal files. But each type of storage has its own distinctive attribute set and has its advantages and disadvantages. It varies on price, maximum and common capacity, speed, fragmentation, durability, availability, form factors, and noise. 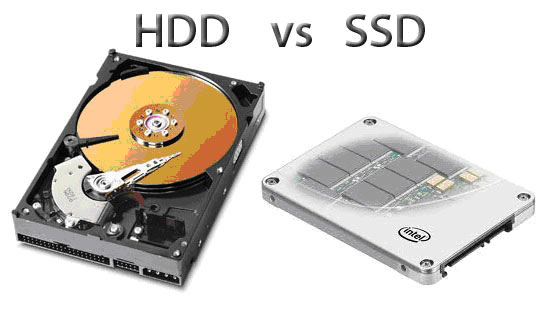 Price: SSDs are more expensive than HDDs in terms of dollar per gigabyte. SSDs can cost almost double the price of HDD per GB. Since HDDs are older, more established technologies, it will remain less expensive for the near future.

Maximum and Common Capacity: SSD units top out at 4TB, which results in being rare and expensive. It is more likely to find 500GB to 1TB units as primary drives in rack mount PC systems. The storage capacity will depend on the applications it requires. The more storage capacity, the more data it can hold.

Speed: SSDs are significantly faster than HDDs. As SDD-equipped embedded PC will boot in seconds and guaranteed under a minute. A hard drive requires time to speed up to operating specs, and will continue to be slower than an SSD during normal usage. SSD is shown to boot faster, launch apps faster, and has faster overall performance. The extra speed may make all the difference when completing tasks.

Fragmentation: HDD surfaces work finest with larger files that are laid down in contiguous blocks due to the rotary recording surfaces. With this way, the drive head can start and end its read in one continuous motion. When hard drives start to fill up, large files can become scattered around the disk platter, which becomes fragmentation. While read/write algorithms have improved to the point that the effect is minimized, the fact of the matter is that HDDs can become fragmented, while SSDs don’t care where the data is stored on its chips, since there’s no physical read head. Thus, SSDs are inherently faster.

Durability: Since an SSD has no moving parts, it is more likely to keep the data safe during harsh embedded environments causing the system to shake or in the event of an earthquake while it is operating. Most hard drives park their read/write heads when the system is off, but during operations they are moving rapidly in the drive platter at hundreds of miles an hour. SSDs are recommended for environments that can be unstable and rough.

Availability: Even though SSD model lines are growing in numbers, HDDs are more plentiful. There are many more HDD choices than SSDs from different manufacturers.

Form Factors: There is a limit on how small the HDDs can be manufactured because of the spinning platters. SSDs have no limitations so they can continue to shrink as time goes on.

Noise: When the hard drive is spinning or the read arm moving back and forth, even the quietest HDD will produce a bit of noise when it is in use. Faster hard drives will make more noise than slower ones. SSDs are non-mechanical, so they virtually make no noise at all.

There has been an upcoming trend in SSD applications in embedded systems. Apacer Technology has overcome SATA III technology barriers and developed the ultra-performance Combo SATA drive, and Corepower technology protects data in cache from impact of power disruption. The water- and dust-proof capabilities are improved by special coating and molding technologies. It also provides industrial- and military-class protection/erase methods and cloud computing-based monitoring software to enhance data protection and remote maintenance capability.

The new SATA Express which is derived from PCI Express specified definition of microSSD and removable SSD modules and optimized solid-state hybrid drives. The specification of SATA Express, a new 2.5 inch storage device interface added to SATA Rev 3.2 keeps the original SATA Connector, with definition changed as two sets of 7-pin SATAPort connectors and ¾-pin PCIe signal. SATA Express is compatible with existing SATA connectors, allowing use of two connection cables. If a SATA Express male connector is plugged in, the interface switches from SATA Express to PCIe. SATA Express is designed to be 2-lane, two-way multiplexing of serial signals with a maximum transfer speed of 2GB/s (PCIe 3.0). 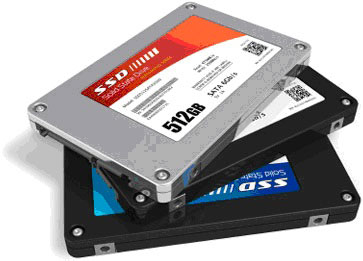 SSDs have been widely adopted by Thin client HMI systems including Point of Sale/Service, medical devices, servers, game consoles, and tablets for booting and storage purposes. For industrial PC purposes, the order of priority in selecting SSDs was previously reliability>performance>cost. But the priorities have now changed depending on different market segments. The emphasis may be on performance; performance>reliability>cost; or, more or less similar to consumer devices, the oder may become: cost>reliability>performance.  For application to industrial PC, SSDs have faced serious challenges to meet requirements of very high speed, cache data protection upon power disruption and ruggedized design, such as water- and dust-proof. In addition, enhanced information security is a must. Users may also want to constantly keep track of the SSDs’ conditions and services life, and they may also need smaller and lighter SSD products.

Demand for onboard storage that meets designers’ performance, reliability, size, low power, interface, scalability and security requirements has resulted in new SSDs with integrated technologies to match embedded system application requirements. Industrial-grade SSDs are available in a wide range of form factors from 2.5-inch and 1.8-inch drives, to CompactFlash and PC Cards and 40 and 10-pin modules plus new ultra-small modules with no compromise in performance, reliability, scalability, and product life. Now that SSDs are viable for onboard storage, embedded system designers can choose from SSD technology that has evolved with faster read/write speeds and that supports popular USB and SATA interfaces, as well as traditional PATA, SD, and MMC interfaces. The latest SSDs are available in capacities that match typical embedded system usage models. These tend to use SSDs for operating system storage, fast boot capabilities, event/error logging, look-up tables, etc. Optimal storage capacity for these functions is well within the capacity range of most SSDs: 512 Mbytes to 32 Gbytes.

Because they only require a fraction of the system power of hard drives, SSDs are an appropriate choice for onboard storage even in the most space-constrained designs. Adding to the power and reliability advantages of SSDs, are integrated technologies that prevent drive or data corruption from power anomalies. The number one cause of storage system field failures is drive corruption from an ungraceful power-down, brownout, power spike or unstable voltage level. When power goes out, the result is often a corrupted drive and ruined data, resulting in costly unscheduled downtime as field technicians reformat drives, reinstall operating systems or return products. New integrated voltage detection technology in SSDs eliminates drive corruption in the event of a power disturbance adding significantly to system reliability.

Security breaches are on the rise for embedded systems, which means that robust security must also be a crucial feature for SSDs. In the past, system design challenges due to the small footprint and lo-power requirements for storage systems used in many embedded system applications prevented storage security options from extending beyond basic encryption technology. Today’s leaders in solid-state technology offer an array of advanced user-selectable security options that prevent IP theft, protect application data and software IP from theft, corruption, and accidental or malicious overwrites. Applications such as data recorders, wearable and field computers, medical monitoring and diagnostic equipment, POS systems and voting machines are now requiring more advanced levels of security that make sure the SSD is usable only on the originally intended host system.

There are a plethora of SSD options available today enabling OEMs to choose the onboard storage solution that matches their chipset, host interface, performance, reliability, power usage model and security requirements. OEMs have the flexibility to design a wider range of products that match the needs of a variety of markets. Designers no longer need to work around form factors and interfaces compatible with the chipsets originally designed for consumer applications. Today, there is a good variety of SSD form factor options for onboard storage that offer the high performance, high reliability, and long product life needed for the rigors of embedded system applications.